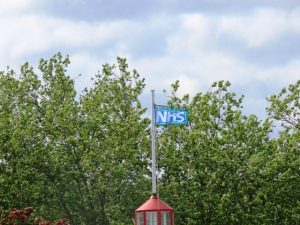 Every Thursday at 8pm the residents living around the Basin and Cabot Cruising Club members on their boats join the nation in thanking the NHS. A cacophony of clapping, boat horns,  saucepan rattling and even a trombone and a Nagar Hills gong rings out over the Basin expressing our thanks and bringing a strong sense of community.

One highlight was an NHS ambulance parked in the Basin car park which turned on its blue lights in reply.

Recently the Cabot Cruising Club has raised an NHS support flag on the John Sebastian (see image), a daily reminder of our debt to NHS and other key workers.