Drinking and chatting in the Cardiff Yacht Club one autumn evening in 2018 after a rather chilly race in the Bristol Channel, I happened to mention I was also a member of the Cabot Cruising Club (CCC). END_OF_DOCUMENT_TOKEN_TO_BE_REPLACED 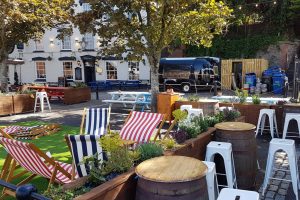 On 20th and 22nd June from 6:30 – 9:30 pm, Butcombe, in partnership with No 7 Boats, is running a 2-stop cruise along the Bristol Harbourside. On board a member of the Butcombe brewing team will discuss the full range of beers and hand out tasters. END_OF_DOCUMENT_TOKEN_TO_BE_REPLACED 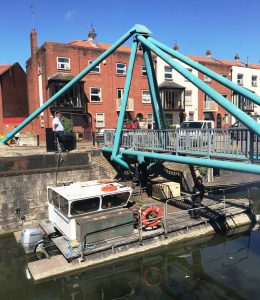 The swing bridge at the harbour entrance to Bathurst Basin will be closed for one week from Monday 20th to Saturday 25th May. We understand that the existing wooden plank pathway over the bridge is being lifted, removed and replaced with new sub floor supports and a new top light grey colour cover platform made of GRP (Glass Reinforced Plastic) covered in a non-slip aluminium oxide.  The bridge structure will then be painted.

Bristol City Councillors Paul Smith and Kye Dudd were invited to meet a group of Bathurst Basin stakeholders concerned about the proposed move of the Ebenhaezer to a mooring on the Lower Guinea Street quay. Present were residents of Bathurst Parade, the General and the Iron Foundry, a representative of the Welsh Back Association, a City and Country representative, some boat owners from Cabot Cruising Club, and Paco Sanchez-Iglesias (representing Casamia and Paco Tapas).

Councillor Paul Smith outlined the history behind the proposed move. Those present expressed strong concerns about the suitability of Bathurst Basin for such a large vessel when there are more appropriate residential moorings in the main harbour. Sympathy was expressed for the owner of the Ebenhaezer who does not wish to move from the current mooring.

Steve Maggs has set up a petition on the iPetitions website seeking support for the view that the move of the Ebenhaezer boat to Bathurst Basin from its current location at Welsh Back is totally inappropriate. Bristol City Council will not allow a petition about the move on its own website because the move is subject to legal dispute. 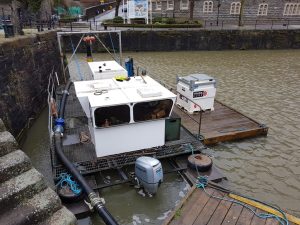 Presumably to ensure that the Ebenhaezer barge can be moved into Bathurst Basin, the entrance to the Basin was dredged in March 2019. The Marine Group, a Cardiff-based company, was commissioned to do the work. The following link explains the dredging method used.