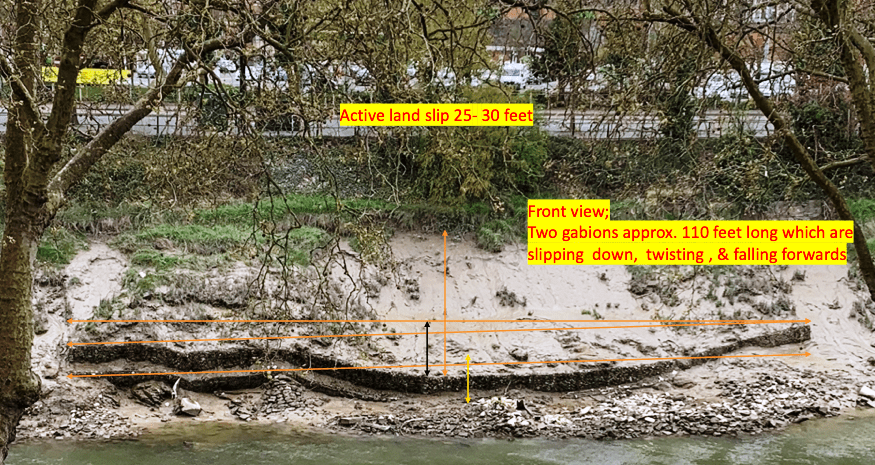 The deteriorating condition of the banks of the Avon New Cut have been of concern for some time. Since January 2020, one lane of Cumberland Road has been closed because of the unexpected collapse of a section of the northern bank of the New Cut. This follows the closure of Chocolate Path because of similar New Cut bank instability.  A section of the New Cut wall closer to Bathurst Basin is now showing signs of movement – as indicated in our image. If this section collapses, the effects on traffic movement into the city could be very serious.

Friends of the Avon New Cut (FrANC) have expressed serious concerns about the state of New Cut banks. FrANC’s Ed Hall is reported by Bristol 24/7 as saying ‘Whilst the cut filling up with collapsing walls is not the end of the world as the amazing tides in this area will just wash the stuff away as the daily tides ebb, the same cannot be said for the surrounding areas. Without a doubt parts of Cumberland Road and Coronation Road will wash away and start the washing away of adjoining areas.’

In 2020 Bristol City Council assessed the condition of 194 retaining wall ‘assets’ in the Floating Harbour, New Cut and Feeder Canal (see the Bristol 24/7 report). 68 of the retaining wall structures were in a ‘critical’ or ‘serious’ structural condition, meaning they have already collapsed or could do so within the next five years. The recent slippage shown in our image may not yet be serious or critical, but it does emphasise the need for continuous monitoring of the New Cut banks and walls.