The Redcliffe tunnel portal and the railway cutting to the right of the Ostrich Inn are  important legacies of Bristol’s industrial past. The double track of mixed broad and standard gauge railway line from docks to Temple Meads was carried by a bascule bridge close to the Ostrich, a bridge that was actually wider than it was long and operated by a stationary steam engine. When the line closed in 1964, this engine was removed to the Industrial Museum (now M Shed). The steam engine had a secondary function, which was to assist manoeuvring large boats using the Basin both through the lock past the open bascule bridge and alongside the working quays. This was done by ropes threaded round the wheels that are still located on the quay edge by Lower Guinea street.

The railway cutting and tunnel were the work of Charles Richardson, an engineer who shaped the railways of the South West for Isambard Kingdom Brunel. Richardson was the instigator and chief engineer for the Severn Tunnel, which was an enormous feat of engineering, and the world’s longest underwater tunnel for over 100 years. Incidentally, Richardson also invented the modern-day cricket bat in the 1880s, and Brunel expressed his displeasure at Richardson sometimes becoming distracted by his interest in cricket.

Whilst awaiting parliamentary approval for the Severn Tunnel, Richardson constructed the Bristol Harbourside Railway for the Great Western Railway Company. This short but highly complex and expensive line comprised a viaduct from Temple Meads, a 260 metre long tunnel under the vicarage and cemetery of St Mary Redcliffe and the cutting and bascule bridge next to Bathurst Basin. 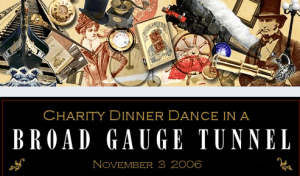 200 years after the anniversary of Brunel’s birth, the Institute of Civil Engineers in the South West decided to celebrate the occasion by recreating  a famous tunnel event of 1830. In that year Brunel’s father faced dwindling funds for his Rotherhyde Tunnel project after a flooding incident. Brunel had the inspirational idea of holding a dinner party in the partially completed tunnel to prove that the tunnel was safe. On 3rd November 2006, the 1830 event was re-enacted in Redcliffe tunnel, which had been prepared with lighting, dance floor and banqueting tables to seat up to 300 people.