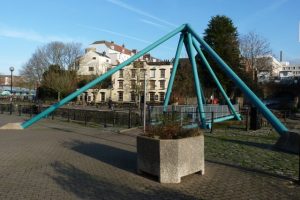 In January 1964 the line from Temple Meads to Prince Street Bridge was closed, following the closure of the Redcliffe goods yard in 1962. The bascule bridge connecting the harbour to Temple Meads by rail was also removed that year.

When the Merchants Landing residential area was developed in the early 1980s, the Council required a footbridge across the entrance lock by the Ostrich pub, then owned by Courage Brewery. The developer considered the cost of the bridge too exorbitant. However, with money from Courage the Bristol Civic Society commissioned engineer Richard Fenton to design a footbridge which he believed could be done more cheaply by using redundant steel dredging tubes from the harbour. His design was accepted and the bridge was the first new footbridge to be built reconnecting the important foot-route along the south shore and signalling the new leisure use of the Floating Harbour.