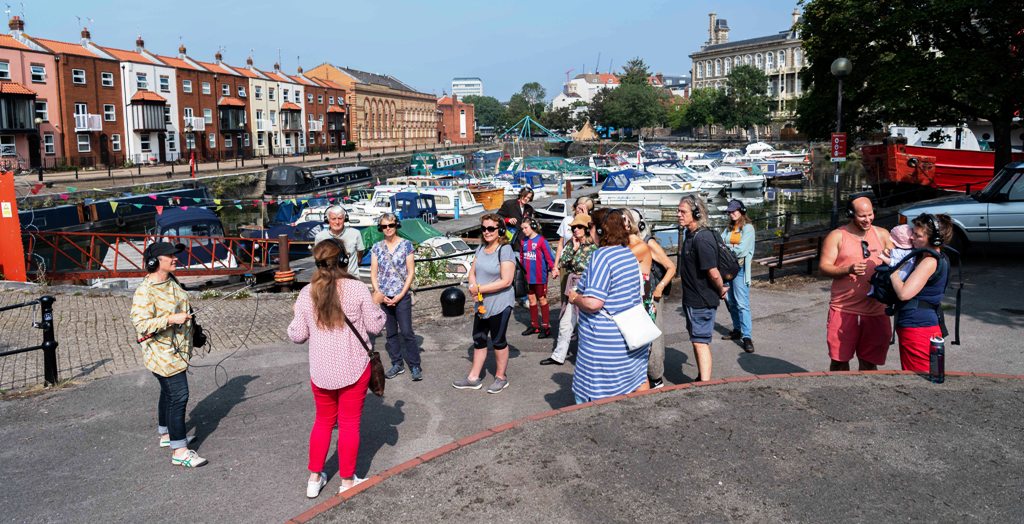 On September 5th, local artist Kathy Hinde led a participatory Deep Listening Walk with water quality scientist Ana Castro-Castellón around Bathurst Basin. Kathy arrived with a selection of microphones to facilitate listening from different perspectives, by tuning in to the often inaudible and imperceptible sounds around us.

All those attending the walk were given a pair of wireless headphones to listen in, whilst still being able to wander and ponder at their own pace. The headphones created a magnified listening experience, so even the tiny sounds of small aquatic species could be heard through careful, focussed listening.

A particular point of interest was the new floating reed bed installed at the basin. From listening, it was evident that there were more signs of aquatic life close to the reed bed than in other areas of the basin. It also became apparent that the reed bed helped absorb some of the louder underwater sounds which can disrupt the behaviour of fish creating a quieter zone to help more sound sensitive species.

Ana specialises in phytoremediation, one example of which is the process of allowing the natural qualities of plants to act as water cleansers. Ana explained that the plants in the reed bed could benefit the water quality and general biodiversity of the basin in numerous ways, such as taking up excess nutrients like phosphates and nitrates from the water, which, if present in abundance, can lead to algal blooms and eutrophication. The root structures of the plants create desirable habitats for smaller insects and aquatic invertebrates, which, in turn, helps support other species.  The flowering plants are not only very pleasing to the eye, they attract more insects, bees and other pollinators, which help support other species such as birds… there are already some moorhens nesting there. All in all, it seems that the reed bed is having a positive impact by improving biodiversity and water quality.

Later in the walk, the hydrophone was dropped into the main thoroughfare of the harbour, where motor boat noise dominated the soundscape. There was a lively discussion around noise, how sound travels, fish species, biodiversity, pollutants, and water quality testing in the harbour interspersed with longer sessions of listening to the world around us in new ways.

Kathy has prepared a podcast from this walk so we can listen to the edited highlights (and from the other series of six walks). The following link has the podcast of the Bathurst Basin event.

The Bathurst Basin event is part of a larger project, led by Kathy Hinde, called River Echoes which is a collective artistled investigation into Bristol’s waterways through a series of participatory Deep Listening Walks and a live sound, music and film event on and under the waters of Bristol.

Images on this page area courtesy of Paul Blakemore.