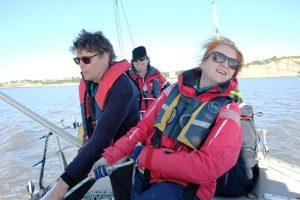 Drinking and chatting in the Cardiff Yacht Club one autumn evening in 2018 after a rather chilly race in the Bristol Channel, I happened to mention I was also a member of the Cabot Cruising Club (CCC). One of the long term members said that he had fond memories of visits to CCC in years gone by and missed them. The vice commodore, Jim Atkinson, was there and suggested we reinstate the visits. The effect of the Brain’s bitter got the best of me and I agreed to do the organisation and liaise with Paul Morris at CCC about setting up a visit.

Well Paul Morris was very keen and offered to do publicity and organise a band and some food. He also managed to get a special deal on mooring fees from the harbour master! It only remained to find a date in 2019 when the tides were right and the weather would be likely to be good. We settled on 11/12 May with highwater just after midday and put the Cardiff Yacht Club WhatsApp groups to good use to advertise the event.

In the end I think eight sailing yachts and three motor cruisers that made the trip, with about 30 Cardiff Yacht club members on board.

It was an early start for some of the slower boats with lock-out from Cardiff at 0700 to make the lock-in at Bristol at 12:10. I was on one of the faster boats and we locked out at 0730. The winds were light to start with but picked up to 16 knots or so in the channel so we got a nice heal on and managed six knots thorough the water. But the wind direction was south east, on our bow, so we had to tack over to the Somerset coast before tacking back and forth a couple of times to make progress up the channel. Sailing boats, even modern ones, can’t sail directly into the wind but have to head at about 30 degrees to the right to left of it and zig-zag along (tack) to make forward progress when the destination is up-wind. Fortunately we had three or four knots of favourable tide so made it to a point adjacent to the mouth of the Avon in time. Frustratingly, we were not able to overtake Jim Atkinson on Meercat who steadily pulled away from us during the trip. (Maybe next time Jim!). The mouth of the Avon was surprisingly difficult to spot, despite modern electronic charts, due to all the docks surrounding it and the absence of a clearly defined entrance. But we eventually spotted the route and made it in.

It was a lovely relaxing cruise up the Avon with the motor chugging away and we passed the Matthew and the Bagheera on the way down to the estuary. The trees were just in leaf and the tide gave us a helping hand. It was good to be out on deck in the fresh air and the sun. There was lots of creative posing and snapping as we passed under the Clifton Suspension Bridge.

The Bristol Dock’s crew were very helpful getting us all into the lock and moored up. The lock was pretty full as the Matthew and the Bagheera joined us. Some of the Cardiff people could not believe that the traffic was going to be stopped twice while the two bridges at either end of Cumberland Basin were swung to let us through. Liz, my wife, had come up to meet us and jumped on board as we moored up in Cumberland Basin.

It was a first trip up to Bristol for many of the Cardiff folk and they really appreciated the SS Great Britain and other historic features on view. Pete from the CCC came out in a tender to meet us as we waited for Prince Street bridge to swing and we were expertly shepherded into Bathurst Basin and helped to moor up by a party from CCC. It was great to see so many masts in the basin and people sitting in their cockpit sipping cocktails in the afternoon sun.

The evening was a great success due to the flawless organization by Paul and the CYC committee. Paul welcomed Cardiff Yacht Club and Jim Atkinson thanked CCC and promised a return visit to Cardiff Yacht Club. The band was great, the beer flowed and there were some memorable demonstrations of dancing. A high point was when ‘snake-hips’ Aris showed us how to dance the Latin way – he was much in demand the next morning for Salsa lessons on the pontoon.

Thanks to all who helped make it a really lovely event. I’m sure that many of us are looking forward to the return trip.