The Friends of Bathurst Basin campaign to keep the Basin an attractive place to live, work and play. We are not against proposals that improve the area – indeed the Basin has thrived on new residential developments from Merchants Landing in the 1980s to the more recent General and Iron Foundry.

However the shortage of city sites for development inevitably tempts developers into schemes that can harm historical sites or worsen the environment for current residents. We will be ever watchful to keep Bathurst Basin free of such developments. 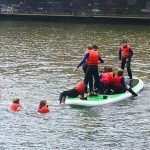 Water quality testing has been discontinued in Bathurst Basin. Given the frequent use of the Basin by water sports enthusiasts, FOBB would like it re-introduced.

FOBB does not support a proposal to build a 96m jetty along the New Cut close to the Basin.

FOBB is concerned about a proposal to build a block of flats in the railway cutting alongside Guinea Street. 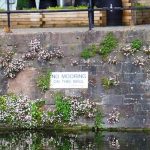 Proposed move of a large barge, The Ebenhaezer, into Bathurst Basin. FOBB writes to the Mayor with detailed concerns.