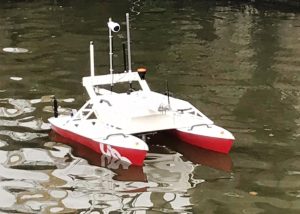 ‘Glanville Geospatial Services’ from Devon and ‘Unmanned Service Solutions – Unmanned Surface Vessels’ from Cornwall are carrying out a ‘LIDAR’’ and ‘Multibeam’ survey of Bristol Harbour using an unmanned vessel called the ’Inception’ (image right), loaded with survey and GPS equipment.

The survey covers the harbour quayside walls, pontoons etc – both above the water and all underwater surfaces. It will include Bathurst Basin. They have started at Cumberland Basin and the teams are working up the harbour to the Feeder.

Bristol Harbour Masters Office crews and support vessels have been very busy supporting the survey by moving moored vessels to and from their locations to enable the Inception to get a clear view of the harbour walls and under water surface. Many of the vessels are moved temporarily to Bathurst Basin (image below) 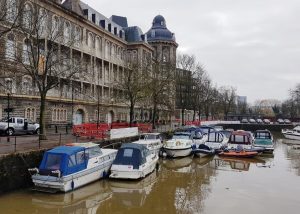 The survey has taken several weeks and still has a couple more weeks to go. As the ’Inception’ cruises around the harbour, the data is sent in real time by 4G to a van parked on the quayside to receive, store and create 3D images and maps as data is received.

Lidar is a surveying method that measures distance to a target by illuminating the target with laser light and measuring the reflected light with a sensor. Differences in laser return times and wavelengths can then be used to make digital 3-D representations of the target. The name Lidar is now used as an acronym of light detection and ranging. It has terrestrial, airborne, and mobile applications.

A multibeam echo-sounder is a type of sonar that is used to map the seabed. Like other sonar systems, multibeam systems emit sound waves in a fan shape beneath a ship’s hull. The amount of time it takes for the sound waves to bounce off the seabed and return to a receiver is used to determine water depth. Unlike other sonars, multibeam systems use beam-forming to extract directional information from the returning sound waves, producing a swathe of depth readings from a single ping.

The mapping reports will be very interesting to see in due course!