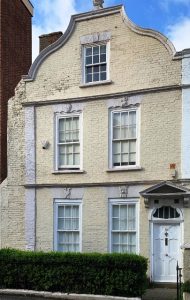 Number 10 Guinea Street will feature in a BBC 2 series on 26th May at 9 pm. It has been selected by  David Olusoga whose programme – A House Through Time – sets out  to uncover the history of a single house, discovering remarkable stories along the way. 10 Guinea Street has a history of piracy, a foundling baby and a runaway slave.

10 Guinea Street was an 18th-century sea captain’s house. According to the BBC preview:

Arriving for the first time, David meets the homeowners Karen and David, who show him around the house. Its panelled walls, flagstone floors and substantial cellars are redolent of history, but the owners know little about their home’s previous occupants. David sets out to discover more.